Yeah, you read that right. Apparently, my last update was sometime in November (that can't be right, I remember it being much more recent... don't I?) but I have been rather busy since then!

The holiday season was kind to me in terms of volume of commissions, and on top of that, Andrew Healey and I were hard at work developing and pitching our two animation projects to studios all over Toronto. Additionally, I made the decision to accompany Andrew to Kidscreen in Miami this past February, in order to expand awareness of our works in progress to the US and international markets. Not surprisingly, we had a lot more success with our comedy project than our action-adventure property. The market wants what it wants, but the persistent storytellers that we are, we are dedicated to bringing the action series to fruition in some form, most likely a kids comic/ graphic novel series. Perhaps this will serve as a proof of concept, but we are both eager and excited to get it out there. Sample scripts are nearly complete for both show ideas, as well as other ideas.

After Kidscreen, I completed my pages for AH Comics' Mark Twain Book, which will see a release sometime over the next couple of months (as soon as I know the date, I will let you know). As you'll see in the page sample below, this took considerable time and effort but I (along with the publisher) are extremely pleased with the results. I can't wait to hold the book in my hand and also get started on my story for the SCI: The Jewish Comix Anthology Vol. 2 (also slated for a Spring release by AH Comics). Contracts have been signed and work started on other comic projects as well, but they are too early stage to share anything just yet (but definitely before the end of the month).


In the midst of all of this activity, I'm also pleased to announce a few upcoming events/ and appearances (which I in large part had taken a hiatus from over the past couple of years...the top of the page still said 2016 when I went to update). As always, I am honoured to take part in events relating to such important causes with so many great people, so in closing, I'm posting the event banners below: 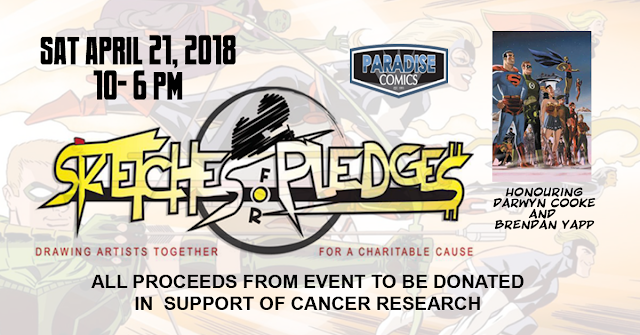 Posted by Shane Kirshenblatt at 7:33 AM