In keeping with my pledge to provide more regular updates, here's what's going on, at present:

My main focus right now is completing my pages for AH Comics' Mark Twain's Niagara Book One, slated for release sometime next Spring. This book features work from many notable artists (too many to list, but if you look at the cover image below, you can see for yourself), with whom I feel honoured to be featured alongside. I'm still thrilled that I had the opportunity to illustrate that cover, especially since it gave me the chance to read the entire script, which I loved and can't wait to read in it's final form! 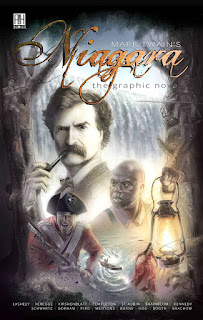 I also recently completed a pinup in support of AH's Kickstarter for SCI: The Jewish Comics Anthology Volume 2. As mentioned previously, this is a bit of a departure from the first installment, in terms of focusing more on original tales with a Sci-Fi twist, than a mix of traditional folk tales and other stories seen in the first volume. It's definitely a change for me since my contribution to that book was an adaptation of a somewhat scary 12th-century tale "The Bleeding Tree", whereas this time around, I'll be taking on more of a comedic yard, "It Could Be Worse". Below is the pinup, which can be yours as a signed print (with a copy of the book) as a reward for supporting the Kickstarter. 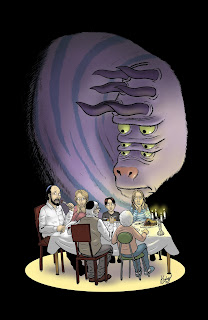 For those of you wondering about progress on the animation projects mentioned in the previous post, things are in the works but it's a slow process. Nothing to report on that just now but I will certainly share any developments as they come up.

Thanks for checking in!
Posted by Shane Kirshenblatt at 6:17 AM